Skip to Main Content
Home » Chronic Fatigue Syndrome / Myalgic Encephalopathy (CFS / ME) may not be what you think!

Chronic Fatigue Syndrome / Myalgic Encephalopathy (CFS / ME) may not be what you think! 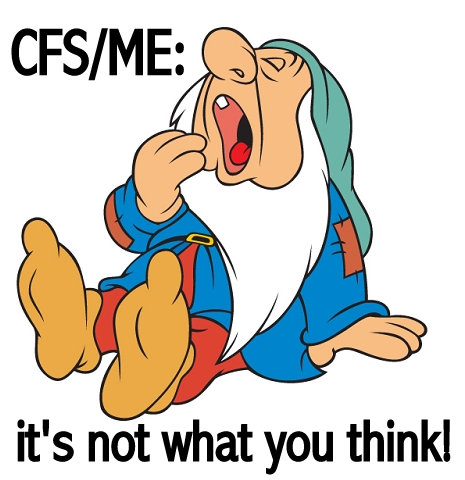 Fatigue is very real, just as is chronic fatigue. And there are a myriad of reasons to have chronic fatigue which will be mentioned below. The Organics Acid Test does reveal that some individuals can have energy metabolism disorders in the mitochondria and do get the Chronic Fatigue Syndrome tag wisely.

But when you look at some of the history behind what is termed “Chronic Fatigue Syndrome (CFS)” and “Myalgic Encephalopathy (ME)” (both describe the same thing, depending on where you live), you might pause as a thyroid patient.

The birth of the term Chronic Fatigue Syndrome

The end of the decade of the 1980’s, and into the early 1990’s, was when the term “CFS” began to appear regularly in women’s magazines and on TV news programs…all based on some individuals who were quite sick. In fact, it was 1988 when “Chronic fatigue syndrome: a working case definition” was created. It might have also been called CFIDS (chronic fatigue and immune dysfunction syndrome), because one could see immune issues as well. If you were around then, you would have heard or read about the following real and miserable symptoms:

The reactivation of EBV seemed to go hand-in-hand with many cases back then, as well, by what you read. You would have also read how “mysterious” it was, and how “new” it was, and how it was an illness of “uncertain cause”, or about an immune system disorder, a central nervous system issue, a post-infection issue, or even a complete psychiatric or psychological problem. And from that time sprang all sorts of CFS and ME institutes, associations, studies and websites from the 1990’s and on, giving all the more “credence” to this supposed new and of-unknown-origin syndrome.

But for too many thyroid patients who get this diagnosis, there can be another reason

Fast forward to the beginning of the 21st century when thyroid patients were beginning to put two-and-two together about themselves:

In other words, we were left with our own degree and kind of continuing hypothyroid symptoms, and for some of us, they were miserable and debilitating. On top of all the above, many of us found ourselves with the additional hell from adrenal fatigue, besides low B12, low iron and more.

And it dawned on several of us as thyroid patients!

CFS was probably NOT a new and mysterious disease of unknown medical origin for many of us a hypothyroid patients.

When we looked at the nightmare of “CFS/ME” symptoms, they resembled the same symptoms birthed from a hypothyroid state, whether from an underfunctioning thyroid, a rare conversion problem, or a problem in our hypothalamus or pituitary glands…and made worse by being undiagnosed by the lousy TSH lab test or poorly treated by T4-only meds, and exacerbated by stress of any source. Dr. Sarah Myhill sees the same connection here (though she continues to mention thyroxine).

Additionally, many symptoms associated with “CFS” resembled the debilitating low cortisol state we fall into from being undiagnosed or undertreated hypothyroid, including unrefreshed sleep, light and sound sensitivity, orthostatic instability, dizziness and more.

If you wonder if you have a cortisol problem, order your own saliva test (for US or Canada): https://saliva-cortisol.squarespace.com/

It’s even very common today to have reactivation of the Epstein Barr Virus when we are undiagnosed or poorly treated due to a compromised immune system from hypothyroidism, or stress, or both. (The creator of this site had reactivated EBV for one MISERABLE year while still on Synthroid and after high stress. i.e. chronic or intense stress on top of a hypothyroid state can be a recipe for a health disaster–and which “CFS” may actually be describing, not a “new and unknown cause” syndrome.)

Then comes a cascading of other problems–chronic inflammation is a huge one. On top of all the above–hypothyroidism, adrenal fatigue and the cascade of more problems, one could then find themselves with Lyme disease to explain a lot of their issues, or find they have a MTHFR defect.

Hypothyroidism and your immune function

In other words, if a person was hypothyroid and didn’t know it, a virus like Epstein Barr, or viral or bacteria pneumonia, or other pathogens can reactivate, as can inflammation increase. In turn, the toxins of viruses cause the body to further tone down thyroid function (with increased RT3) as a way to focus more on the virus and less on metabolism. It becomes a double whammy, and can explain why doctors thought there was a new syndrome–Chronic Fatigue Syndrome–not understanding that most individuals may have had hypothyroidism as the cause, and further hypothyroidism muddying the waters…all thanks to the inadequate T4-only meds and the lousy TSH lab test!

Having adrenal fatigue, which is all-too-common with hypothyroidism, makes it even worse. When one has a viral or bacterial intruder, cortisol is needed to balance out the high inflammation response by the immune system in its attack on the intruder. If one’s adrenals are sluggish already (which is common with hypothyroidism), there won’t be enough cortisol, and inflammation will also rise. Both hypothyroidism, the additional complication of adrenal fatigue, and hypo-caused low iron, low B12, candida and more can explain the symptoms and findings of “CFS / ME”!

Other causes of chronic fatigue with accompanying problems, in lieu of a “syndrome of mysterious cause“

Could there be anyone with a “chronic fatigue” issue not related to hypothyroidism and/or adrenal problems, or the above?

Yes! For example, in 2015 and after being optimally treated on NDT for nearly 13 years, Janie Bowthorpe noticed that while detoxing high copper levels, she was far more deeply fatigued that others reported from detoxing a heavy metal. Why was that? She found her answer via Organics Acid Test—she has an inefficient energy metabolism issue in her Citric Acid / Krebs cycle, probably inherited. Her body also seemed to stop making CoQ10, i.e. the energy it took to detox was more than her inefficient energy-producing system could handle. You can read about it here. A mitochondrial issue can cause fatigue unrelated to hypothyroidism.

One could have chronic fatigue from Lyme disease, or viral issues, or liver problems, or Addison’s disease..the list can go on.

But the bottom line for thyroid patients in particular is that the “Chronic Fatigue Syndrome” diagnosis has all too often been thrown on them by doctors who didn’t and haven’t understood the problem of being treated with T4-only medications, or being held hostage to the TSH, or having an adrenal problem outright due to being undiagnosed, on T4, or held hostage to the TSH. And informed thyroid patients look back at the 1980’s and early 1990’s when the mysterious syndrome called CFS / ME was thrown around, and realize that for probably a majority, it was actually the above problems with hypothyroid.

Is Fibromyalgia in the same misunderstood category as CFS?

Definitely yes for many! Fibromyalgia can be strongly related to undiagnosed or undertreated hypothyroidism. You can read about it here.

Deciding you have some separate syndrome called CFS/ME may end up muddying the water in your recovery from what might actually be hypothyroidism, undiagnosed or poorly treated.

Were you diagnosed with CFS or ME, only to find it go away once you addressed your thyroid and/or adrenal status, or other issues like Lyme, chronic inflammation, methyl blocks, etc? Use the Contact on STTM to send your story to Janie and she’ll include it here.

Note: ME can also be termed Myalgic Encephalomyelitis.