Skip to Main Content
Home » Help! My thyroid is enlarged!

Help! My thyroid is enlarged! 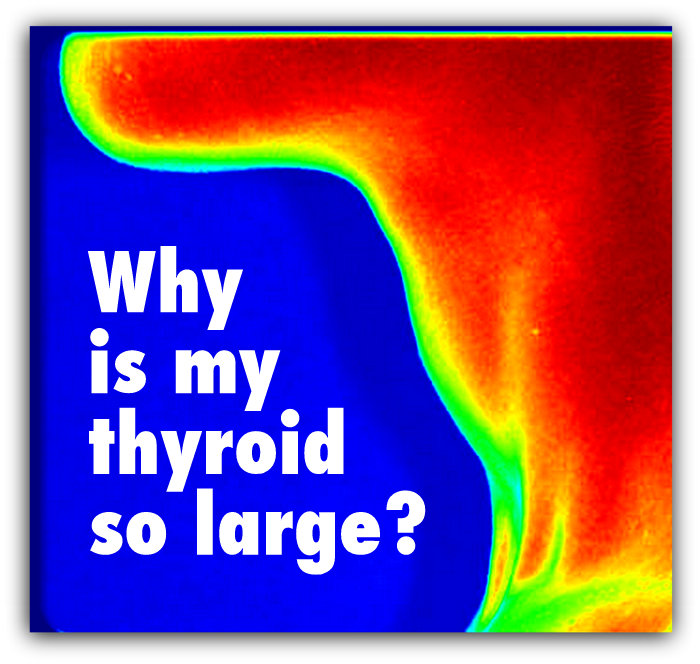 Ever noticed that your neck looks larger when looking in the mirror?Have you ever been told that your thyroid sticks out? Have you been told it has to come out?There may be more to the story! First read all the most common (and not so common) causes and treatments which patients have used for an enlarged thyroid, which hasn’t always entailed surgery. ~Janie, hypothyroid patient and site creator

This is an autoimmune version of thyroid disease, which means your thyroid is being attacked by your own immune system, which causes the thyroid to swell from inflammation. The enlargement is commonly called a goiter and can range from very slight to a very noticeable enlargement. And it’s very treatable! Read the Hashimotos page. Learn why you have to insist on BOTH antibodies tests, not just one, to diagnose Hashi’s….and what patients have learned in treating it successfully, which ends up decreasing the swelling. There is also more in the Hashimotos chapter in the revised STTM book.

Just like Hashi’s above, your thyroid can enlarge due to another autoimmune attack, but of the thyroid-stimulating immunoglobulin (TSI)?also called the TSH receptor. They should be tested to be sure. As a result of Graves, your thyroid hormones increase and increase, and your TSH gets lower and lower, and you can have very hyper-like symptoms like weight loss, higher heart rate, shakiness and more. But there are other treatments one can try first before heading to have one’s thyroid removed, say patients. One is anti-thyroid drugs (ATDs). Some patients also use Low Dose Naltrexone (LDN) very successfully, which improves your immune function and can lower the antibodies, and thus decrease the growth of your thyroid. Read what Elaine Moore, a Graves patients advocate says on her Graves Disease website. Also note that you can have both Hashi’s and Graves antibodies, and LDN has helped many.

It’s said that the cause is unknown, but patients can see these abnormal growths just from being hypothyroid, either from being undiagnosed thanks to the lousy TSH lab test (which can look normal but you’re not!) or the use of T4-only meds like Synthroid (which leaves you hypothyroid). Iodine deficiency can cause them, as can the use of the prescription drugs Aamiodarone or Lithium. They are usually single or multi; some can be felt, others are too deep. But they still can “enlarge” your thyroid area. Sometimes they are just filled with fluid or blood and could also be called cysts. Only a very small percentage of these are cancerous–see below. Thyroid patients have reported repeatedly that their benign nodules/cysts went down from the proper treatment of their hypothyroidism, especially with natural desiccated thyroid rather than T4-only, besides correctly discovering and treating one’s low cortisol and low iron, if necessary. But if they are so large, such as more than 4cm, that they are blocking airway and the patient is now having trouble with breathing or swallowing, surgery may be needed.

Here is an excellent story by a thyroid patient who was able to shrink her nodules with iodine and NDT, called The Case of the Missing Thyroid Nodules.

Even less common than thyroid nodules, thyroid cancer usually enlarges just one side of your thyroid. It’s diagnosed after doing a fine needle biopsy. Important note: this can be one reason to definitely have your thyroid removed! But you can also read Stephanie Buist’s website Natural Thyroid Choices, where she explores natural options for thyroid cancer. Always find a good and supportive doctor to work with if you have thyroid cancer. See all the STTM information on thyroid cancer here.

This was always the most common reasons our ancestors saw themselves with an enlarged thyroid, which is the thyroid’s attempt to get more iodine, which it needs to function. But it can happen to any of us today, and doing an iodine loading test is key to finding out if we need iodine supplementation. Many patients use Lugols iodine as a supplement, or the pill form. You can also negatively inhibit iodine by eating large daily amounts of foods like cauliflower, broccoli or cabbage–goitrogens.

Congratulations….but some see their thyroid enlarge a bit thanks to the HCG hormone (human chorionic gonadotropin) rise in their bodies when pregnant.

This is a umbrella term to describe inflammation of the thyroid, which can cause enlargement. Hashimotos is a form of thyroiditis, but there are other versions. Several kinds are mentioned on STTM’s Thyroiditis page. The proper treatment is necessary, as might be a strong anti-inflammatory.

This is a name given to a toxic multinodular goiter–the latter which can enlarge your thyroid gland with firm nodules and cause hyperthyroidism. It’s stated to mostly be found in adults over sixty. Wiki states it’s the “second most common cause of hyperthyroidism (after Graves’ disease) in the developed world”. Some literature states that it rarely causes the ophthalmologic “bulging eyes” the way Graves disease does. Standard treatment is the same as Graves though, with anti-thyroid medications, or RAI, or removal. More here to consider in working with your doctor.

This kind of goiter is more rare and can genetically run in families. “Patients typically present at birth or shortly thereafter with hypothyroidism, goiter or growth retardation (cretinism). The hypothyroidism is due to enzymatic block at various sites in T3/T4 pathway that result in any of the following:

From thyroid patient TA: The link that started me finding out what I had: http://www.ncbi.nlm.nih.gov/books/NBK28/#A364 “Goitrous hypothyroidism in childhood may be due to defects in the synthesis of thyroid hormones.” Note: I am going to point out it says *or*, not and/or. You do not have to be hypothyroid to have a dyshormongetic goiter. Final Diagnosis — Case 425 Dyshormonogenetic goiter (DG) is a rare disorder that affects 1 in 30,000 to 50,000 live births…. PATH.UPMC.EDU

What if your breathing or swallowing is impaired by your enlarged thyroid, and you know it’s not cancer?

Several thyroid patients over the years have found themselves in these shoes, and they report they had to evaluate how critical they were. i.e. could they wait long enough to do a different treatment to shrink it, especially if they know it’s not cancer? Several have chosen the better thyroid treatments and succeeded in shrinking the enlarged thyroid. This will be an individual choice by any thyroid patient along with a good working relationship with an open-minded doctor.

*** DO YOU HAVE A STORY ABOUT HAVING AN ENLARGED THYROID YOU SUCCESSFULLY TREATED? Send your story via the Contact at the bottom of the page and we’ll put it here!

From Thyroid patient L: She went into a clinic for a bad cold. The doctor walked in and asked her if she was there about her thyroid. She said no (she had no idea she had a thyroid problem!). He said, “Your thyroid is inflamed”. After an ultrasound disclosed no nodules, he told her it was enlarged in order to produce more thyroid hormones. He put her on thyroid medication. Her thyroid shrunk. Within three months she was pregnant, which was something she’d been over a year trying to achieve.

From Carolyn of Australia: “My goitre was more an internal problem but was visible on my neck. My voice went croaky, lost the use of my higher note vocal chords. I had difficulty breathing at night and some days my airways were 95% blocked. My ultrasound showed 16 nodules with one being 1.5cm. Old dr didnt know enough so I changed drs! I moved from T4-only to NDT as well as a LCHF diet. Best thing I ever did. Goitre took a year to shrink and disappear and I have my voice back!?

From Cheryl: She used iodine and natural desiccated thyroid to get rid of hers. Read her story right here: https://stopthethyroidmadness.com/2014/08/02/case-missing-thyroid-nodules/

From Bonnie of the US: Bonnie reports that after years of coughing and choking, feeling many hypo symptoms (and being ignored by her doctor), she was found to have to have a low FT3 and FT4 along with high Hashi’s antibodies. Ultrasound revealed an enlarged thyroid with changes consistent with thyroiditis. A few months after starting NDT, her choking and coughing stopped and a thyroid ultrasound revealed her thyroid had shrunk back to normal size.