Skip to Main Content
Home » What does pooling mean?

What does pooling mean? 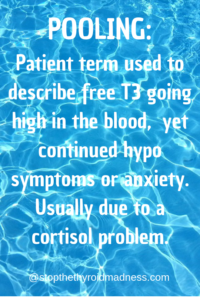 Have you ever discovered that your free T3 lab result was very high and/or over-the-range (pooling), usually with a low free T4, and with continuing symptoms??

Yes, contrary to strong opinions that pooh-pooh this real phenomena, it can happen to people in the presence of low cortisol, and sometimes even high cortisol. We see it a lot.

Pooling means your free T3 isn’t making it well to your cells, and instead, is hanging out in your blood, going higher and higher as you raise your T3-containing medication like Cytomel (T3) or natural desiccated thyroid. It can even happen with T4-only.

You may or may not know it’s happening at first. But sooner than later, pooling can end up promoting excess adrenaline and hyper-like symptoms in some, or be silent in another. But the problem is that it can increase your hypothyroid symptoms.

What are symptoms patients experience due to pooling, which pushes excess adrenaline?

They are individual. Some people notice nothing. Some notice increased hypothyroid symptoms. Others notice symptoms such as anxiety, panicky feeling, shakiness, heart palps, higher heartrate, higher blood pressure, etc. Other issues can cause those latter excess adrenaline symptoms, too, but we do notice them when pooling, as well.

How have patients figured out they are pooling??

Exactly as explained above. First, you may see a free T3 towards the top of the range (where it seems to end up when we are optimal on NDT, for example) or even way over range...YET, there will be continued symptoms of hypo or for some, symptoms of excess adrenaline for others. So though it “looks” optimal, it may actually be pooling.

Or we may see a high-in-the range T3 (or over) with a free T4 that’s lower in its range–the latter can be common, too, for pooling.

What causes pooling and what have patients done about it?

For most hypothyroid patients, the causes are pretty clear: inadequate levels cortisol first and foremost, usually too low cortisol, and sometimes high. So either of those will need to be discovered and treated.  Cortisol is always tested via saliva testing, NOT blood.

And when you get your lab results back, note that they have nothing to do with just falling in the normal range. They have to do with where they fall in those ranges, patients have observed for years now. Your doctor probably doesn’t yet get this, so you don’t either. Always compare your results to this Lab Values page.

Also accompanying pooling sooner or later, and we are using Natural Desiccated Thyroid or T4 in your treatment, is rising Reverse T3 (RT3)–the inactive hormone that if in growing amounts, contributes to the “pooling” since it’s competing for the same cell receptors as T3, and blocking the door! T4 in higher amounts converts to RT3 if you have an iron or high cortisol problem!

A high FT3 will also mean your RT3 ratio can look good, but it may not be!

Do pooling and a high Reverse T3 come together?

Not always. From looking at each other’s labs, some will see pooling first without having an excess of RT3. Later, if they continue to raise NDT, the RT3 dominance can occur.

If I have no symptoms of pooling, yet it’s very clear with labs, do I not have a problem?

No, patients still see a problem and need to treat the pooling, we’ve discovered, which is usually always about a cortisol issue.

My doctor wants me to move back over to T4-only, claiming the T3 in NDT is just too much for me. Is that the solution?

Doctors don’t get the pooling and what causes it. So they tend to send us back to an inadequate treatment with T4-only, which yes, can stop the pooling as well as uncomfortable symptoms of high adrenals. But we found it’s NOT the solution and only makes the reasons for your pooling WORSE.

What is the treatment solution for pooling, say patients?

First and foremost, patients report learning over the years to treat the causes of pooling by ordering a 24 hour adrenal saliva test, since low cortisol is a main reason.  And we found repeatedly that the results have nothing to do with just “falling in the normal range”. They have to do with “where” in those ranges they fall. See www.stopthethyroidmadness.com/lab-values

a) Some do fine keeping the pooling as it is, but they still need to discover and treat the causes. (NOTE: If the cause is low cortisol and you have to start on cortisol, you WILL have to lower the pooling, otherwise, that high T3 will RUSH into your cells causing hyper when you start on cortisol.)
b) Others go down on their NDT or T3 if they notice symptoms like adrenaline excess or other issues. They will go down sometimes more than half, allowing the pooled T3 to fall, and which can happen within a week if lowered enough…and may take longer to fall if one is only on NDT. Patients then report they can add back in a small amount of straight T3 (i.e. T3 to the lowered NDT they were now on, or T3 to the smaller amount of T3 they were now on), and raise in small increments to alleviate symptoms of hypo. How much added T3? 10 mcg T3 is a good starting dose to add back in, or half a 25 mcg tablet to equal 12.5 mcg if you only have the larger tablets. As symptoms of hypo return, patients may add smaller increments of T3. But it’s important to remember that your T3 will pool again if you haven’t treated the reasons for it, so judicious use of the added T3 is important.

c) Patients have also learned over the years, that if getting ready to start on cortisol in the treatment of low cortisol. it’s imperative to first get the high free T3 down, otherwise it will RUSH into the cells and cause hyper!

If saliva testing reveals low cortisol and I need cortisol supplementation, can I start on cortisol with that pooled and high free T3??

Not unless you want to have the worst hyper from hell, say thyroid patients who learned the hard way. Hydrocortisone or Adrenal Cortex will finally enable T3 to get to the cells. So if free T3 is still high, it will RUSH in like the Dutch boy releasing his finger from the dyke. Thus, we lower the free T3 by lowering our meds before starting on cortisol.

We’ve learned how very important it is, before raising NDT or T3, to see where our adrenals stand, and all four iron labs, by comparing the results to the Lab Values page, then treating if we see a problem. Or at the least, to test more often as we are raising to catch it!

HAVE YOU BENEFITTED FROM STTM?? Please donate to the hosting fee! Though the minimum you will see is FAR BELOW what we pay monthly, it will be appreciated!