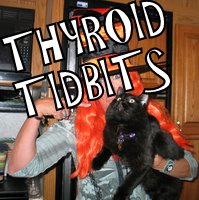 (Though this post was written in 2010, it’s been updated to the present day and time where needed. Enjoy!)

I recently attended a lecture at a restorative medicine conference (kinda snuck in), and had a wonderful chat with a surgical nurse from Canada who is on Armour and didn’t even know about Erfa–the Canadian version of desiccated thyroid simply called “Thyroid”. She was thrilled to find out about it, but it was shocking to me that she didn’t know about a VERY good desiccated thyroid product right on her turf!

But even more concerning to me was being reminded that Canada has a severe shortage of doctors. Because that means it can be even harder for Canadians than Americans to find a good doctor when it comes to better thyroid treatment. It’s hard enough here: how it must be in Canada is chilling. And even if you do find one–because there are some there–the wait has to be long.

UPDATE: Erfa started to cause problems for patients, which I first reported about twice in 2014, and the most informative post is here. Even into 2016, some patients continued to have problems, but they were lessened.

ARE 90% OF ALL MEDICAL STUDIES and CLINICAL RESEARCH WRONG?

Yes, according to meta-researcher and influential scientist Dr. John Ioannidi, and which was outlined in the recent issue of The Atlantic by David H. Freedman. Freedman states: Much of what medical researchers conclude in their studies is misleading, exaggerated, or flat-out wrong.

AND DO THYROID PATIENTS EVER KNOW THIS TO BE TRUE!! How many studies are there that imply that T4-only medications work ever-so-brilliantly, yet our experience with T4-only has profoundly debunked that “research outcome”.

Patients have noted that much of what is achieved in research is to obtain money for those sponsoring the research, i.e via the sales of the product studied, like T4. Even Freedman states:

This array suggested a bigger, underlying dysfunction, and Ioannidis thought he knew what it was. “The studies were biased,” he says. “Sometimes they were overtly biased. Sometimes it was difficult to see the bias, but it was there.” Researchers headed into their studies wanting certain results–and, lo and behold, they were getting them. We think of the scientific process as being objective, rigorous, and even ruthless in separating out what is true from what we merely wish to be true, but in fact it’s easy to manipulate results, even unintentionally or unconsciously. “At every step in the process, there is room to distort results, a way to make a stronger claim or to select what is going to be concluded,” says Ioannidis. “There is an intellectual conflict of interest that pressures researchers to find whatever it is that is most likely to get them funded.”

Hooray for Ioannidi! Thyroid patients have royally suffered for over 60 years partly due to poor research outcomes favoring T4-only treatment, and we appreciate individuals like this man for exposing the truth! To read the entire brilliant article, go here.

IS ARMOUR CHANGING BACK…OR WHAT IS GOING ON?

Rumors often start on the patient groups, and I usually just note them, and do nothing. But one rumor which continues is that Armour tablets by Forest Labs seem to be back to the old formulation. One gal emailed me and said her bottle seemed to contain both the newly reformulated Armour (harder, unable to do sublingually) and the older version (softer, can be done sublingually. What’s that about?? It’s odd.

UPDATE: In 2014, Forest Labs was bought out by Activas, and in 2015, thyroid patients once again reported a return of symptoms and a change in the pills. Armour also tripled in price. Not everyone was experiencing the return of hypothyroid symptoms (perhaps they were still using the Forest made Armour), but enough were they many started to change to other brands. That continued into 2016. Even the tripling of price was enough for patients to say “NO MORE!” Read about it here. .

65 Responses to “About Canada, 90% flawed medical research, and is Armour changing?”