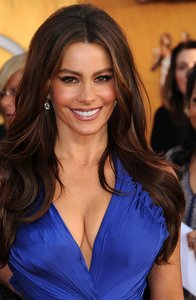 A new campaign has started called “Follow the Script” and you will see the smiling face of Emmy-nominated actress Sofia Vergara next to the proclamation: ‘YOUR THYROID CAN AFFECT THE WAY YOU LOOK, FEEL & SOUND.

Oh sure…it looks all well and good. We want everyone to be aware of the problems of hypothyroidism! And we’re glad if Sofia Vergara feels she is doing well enough for the moment to let herself be paid to do this ad.

Says Sofia Vergara: “In 2000, I was diagnosed with thyroid cancer and had to have my thyroid removed. As a result, I have a hypothyroid condition and need to take medicine to treat it.” She continues: “In my career, I’m known to ad lib and go off-script but not when it comes to my health. I make sure to ‘Follow the Script’ so I get exactly what my doctor prescribed. This is so important to me, because you can’t enjoy what you have without your health.”

And this is where you hear a booming THUD.

As reported by a huge and growing body of patients in groups all over the internet and across the world, T4-only medications just like Synthroid have done nothing more than keep them sick and sicker in their own degree and kind with their hypothyroidism…sooner or later. In addition, all too many T4-only patients find themselves falling into adrenal fatigue, low iron, low B12, low Vitamin D, immune dysfunction, weight gain, rising blood pressure or cholesterol, reactivated Epstein Barr Virus and more…all due to the inadequate treatment of their hypothyroidism with T4-only meds like Synthroid!

i.e. this is NOT about “whatever works for you”– the watered-down, walk-the-fence message that fails to tell the truth about what T4-only medications has done to millions, besides exposing many more newly-diagnosed thyroid patients to the problems that befall so many while on T4-only. It’s about promoting a product that has left all too many with compromised lives and declining health as compared to the life-changing results from the use of T3-only or even better, natural desiccated thyroid. It’s natural desiccated thyroid which gives you everything your own thyroid would be – T4, T3, T2, T1 and calcitonin. And it’s changed lives!

Informed and intelligent thyroid patients worldwide who know the ugly truth about Synthroid are not going to be the least impressed with celebrities who think it’s hunky dory to make money promoting an inadequate medication which has only served to compromise their lives in their own degree and kind…sooner or later…and which will do the same for many others, guaranteed.

VITAMIN D AND MAGNESIUM GO TOGETHER

A common scenario with hypothyroid patients who have been on T4-only medications is finding themselves with low levels of many nutrients, including Vitamin D. Why? It appears that continued hypothyroidism lowers stomach acid, and that in turn hinders nutrient absorption like Vit. D, iron, B12 and more.

And it turns out that once you get your Vitamin D levels back up, it’s also crucial to have enough magnesium for your body to utilize Vitamin D effectively. Says the Vitamin D Council, magnesium helps your body activate vitamin D into a form your body can use, as well as helps maintain your calcium levels. They state that you may need more magnesium supplementation that is normally recommended, such as between 500 and 700 mg a day. Dr. Mercola feels that 80% of you aren’t optimal in magnesium.

So it may be wise to get your magnesium levels checked and keep them optimal. Foods higher in magnesium include green leafy veggies like spinach, avocados, dried coriander, cocoa powder (hooray!!) pumpkin seeds, almonds, sesame and sunflower seeds.

The makers of Naturethroid, RLC Labs, have reinvented their tried and true Westhroid version of natural desiccated thyroid into “Westhroid-P”, calling it “the purest treatment for hypothyroidism” with only three listed inactive ingredients: Inulin (a natural fiber with natural sweetness), Medium Chain Triglycerides, and Lactose Monohydrate (which is inherent in the NDT). It’s also stated to be gluten free. Looks promising. We’ll see how it work for patients, because it’s patient experiences, not opinions, which rule! 🙂