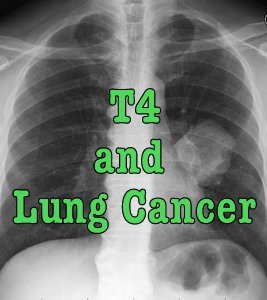 This complete study came out just last Thursday, August 8, 2013, in the Reproductive Biology and Endocrinology journal and it’s certainly not good news, if true, on top of what thyroid patients already know has been a failure in so many ways.

The Italian authors said the correlation between lung cancer and T4-only treatment was “significant“!

In other words, says the study, as hypothyroid patients raise their T4-only levothyroxine medication to chase continuing symptoms of hypothyroidism, it can lead to medication-induced hyperthyroid state, which in turns leads to an overproduction of oxidative stress. The latter oxidative stress is a known cause of cancer and other chronic diseases. But with T4-use, it’s specifically problematic for lung cancer, implies the study.

Oxidative stress can be defined as a that which results in “significant decrease in the effectiveness of your iinherent antioxidant defenses, such as glutathione” (Wikipedia). And there are two main consequences: your body doesn’t detoxify itself well, nor does it repair any damage well because of free radicals.

The prevalence of breast, colorectal, gastric and lung cancer in 18 Italian Regions during 2010 was correlated with the sales of LT4 in 2009. The cancer prevalence was analyzed in women aged 30—84. This age range corresponds to more than 80% of the consumers of the drug and to about 99% of all malignant cancers. The correlation between sales of LT4 and cancers was determined with the technique of Density Ellipses. The age and smoking contribution for lung cancer was determined with the Sequential test.

Lung cancer was the only tumor found directly correlated with LT4 supplementation.

It’s particularly interesting to note that simply being hypothyroid results in increased oxidative stress, but the use of T4-only medications creates the same problem via a different route, explains the study. “LT4 can alter the oxidative balance in lungs and behave as a negative factor because of oxidative stress….”

The authors conclude that “hypothyroidism might also be involved in the development of lung cancer”, but the study does send an alarming message about the correlation between T4 use and lung cancer, as well.

The website Green Med Info, which promotes natural and integrative modalities, goes further into the discussion about the problematic nature of treating hypothyroidism with T4-only, stating

One of the main drawbacks of administering T4 in isolation is the possibility that it will not convert adequately to T3, and will therefore ‘back up’ causing excessive T4 activity, i.e. hyperthyroidism. There is also the very real possibility that T4 will not only not properly interact with thyroxine cellular receptors, but will block out what remaining natural levothyroxine the thyroid is still producing (and whose conformational state is far more health-promoting), essentially acting as an endocrine disrupter at the very moment that it is acting as intended as a ‘TSH suppressor.’ This T4 blocking/endocrine-disrupting property of the synthetic form would also activate a negative feedback loop within the endocrine system, further suppressing remaining thyroid function, and resulting in the atrophy of the compromised thyroid, a iatrogenic ‘self-fulfilling prophecy’ if you will.

And they conclude: “There is also compelling research indicating that desiccated thyroid extract (Armour thyroid) results in superior clinical outcomes versus the synthetic hormone, especially as concerns improved body weight.” And of course, patients who have switched to natural desiccated thyroid (NDT) have reported FAR better results repeatedly! Brands are not limited to Armour. Other brands which patients like include Erfa, Acella (NP Thyroid), Naturethroid, Westhroid-P and more.

Message to those still using T4-only

Millions of hypothyroid patients have reported millions of prices in their own degree and kind thanks to their use of T4-only medications. Now we have a study that implies your risk of getting lung cancer is increased. What’s next?? It’s not a pretty picture, if the correlation turns out be accurate for some. Time to take a strong and open-minded look at what patients have learned.

ADDENDUM FROM JANIE: Please note that this study doesn’t say that every single T4 user is going to get lung cancer. My mother was on Synthroid her entire life, and though she had many miserable symptoms from it being a poor treatment for her, she never got lung cancer. It just seems to say that the researchers noted increased oxidative stress with T4 use, and they saw a correlation between that and lung cancer in some. Read the entire study information here and decide for yourself.

61 Responses to “More BAD news if you are on T4-only like Synthroid??: It might cause Lung Cancer, says a study!”