Skip to Main Content
Home » Janie’s Blog » Wall Street Journal’s recent thyroid article: 13 ways it could have been SO MUCH better! 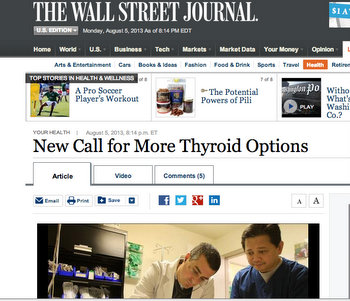 (This post has been updated to the present day and time! Enjoy!)

As usual, informed thyroid patients can only roll their eyes about the latest example of a watered-down, thyroid-themed article in the media. This time, it’s from Wall Street Journal Online and appeared Monday, August 5th, 2013.

Now on the positive side, the title looks good: New Call for More Thyroid Options.

But let’s set it straight: this is NOT new! Informed thyroid patients have been clamoring about better treatment for more than a decade!!

I started the Yahoo Natural Thyroid Hormones group in 2002 as a way to begin the important discussion about the efficacy of Natural Desiccated Thyroid as a treatment for hypothyroidism over T4-only. The Stop the Thyroid Madness (STTM) site first went up in December 2005–a compilation of worldwide patient experiences which included lives being changed thanks to natural desiccated thyroid (NDT). The STTM book by the same name first appeared in 2008, and the revision in 2011. The STTM II book came out in late 2014. Today, there are numerous thyroid groups all over Facebook which have been extolling the virtues of better treatment.

Let’s break the article down and go into further detail, correction or clarification–all which might have made this a MUCH more informative and accurate article:

1) Grass roots patient-activist organizations….and the doctor-founded National Academy of Hypothyroidism, say that the current screening test for hypothyroidism leaves out some symptomatic patients and that the main medication used to treat patients, doesn’t always alleviate many symptoms.

True! And let’s be more specific about that so-called “screening test”: it’s the inane use of the TSH lab test which has been a monstrous screening failure! The TSH is a pituitary hormone, NOT a thyroid hormone! And it can consistently look “normal” for years (according to the parameter of an erroneous man-made “normal” range), yet we have raging hypothyroid symptoms…all the while the patient has to hear his or her doctor state they need to “exercise more and eat less”. The “main medication” is the all-too-often lousy T4-only medication like Synthroid, Levoxyl, Levothyroxine, Eltoxin, etc. Yet, a healthy thyroid makes FIVE hormones, not just one.

2) They are calling for doctors to be open to other therapies, including a combination of synthetic hormones and the use of natural, animal-based ones.

True. But though adding synthetic T3 to synthetic T4 is a huge step in a much better direction and can be applauded (and so can being on T3-only), a multitude of worldwide patient experience has found that Natural Desiccated Thyroid has given these patients even better results (in the presence of good iron and cortisol levels). Doctors need to listen to that!

3) Hashimoto’s Disease: A Primer (box on the left side of the article)

What a perfect way to lower the quality of an article. As usual, it contains the dark ages information about the use of the TSH, and mentions the “common” treatment of T4-only. They might as well have inserted a primal on blood-letting.

4) [In reference to Dr. Ridha Arem’s correct comment that “There are so many unhappy thyroid patients,”] : Many of his mainstream medical counterparts disagree. “The vast majority of people are fine on the standard therapy,” says Jeffrey Garber, an associate professor of medicine at Harvard Medical Center and chair of the American Association of Clinical Endocrinologists Thyroid Scientific Committee. Still, he says, “there’s a whole group out there who just thinks we’re clueless.

5) The wide range of symptoms, so similar to those of many other diseases, can make diagnosis tough.

Totally untrue, say thyroid patients! Thyroid disease has a common cluster of symptoms in patients, which can include one or more of depression, fatigue, the need to nap, rising cholesterol, rising blood pressure, achiness, hair loss, weight gain, inability to lose weight, dry skin, dry hair, achiness, a low mid-afternoon temperature (below 98.6F/37C) and so many more symptoms.

Additionally, we have noted that if our free T3 is mid-range or lower, or our Free T4 is low, along with the above symptoms, it’s a sure sign that we are hypothyroid. Finally, family history underscores it for others, as can an ultrasound. It’s not that difficult when you understand the clinical presentation of hypothyroidism over an ink spot on a piece of paper!

6) Newborns and pregnant woman are routinely tested. Experts recommend screening all women over the age of 35 every five years.

And how does that help when the testing/screening is with the inadequate TSH lab test, which we, as patients, already know leaves millions of us undiagnosed for years.

7) For treatment, guidelines generally call for the prescription of levothyroxine, a synthetic version of a hormone called thyroxine, or T4, which is produced by the thyroid. The gland also produces one other hormone, Triiodothyronine, or T3.

8) Most doctors, says Dr. Arem, generally prescribe T4-only medications. But such medications may leave some patients with lingering symptoms such as fatigue and depression and, in some cases, low T3 levels.

He’s right! But there’s more to the story. Even those T4-only treated patients who see a removal of those lingering symptoms still end up seeing them crop up the longer they stay on T4! T4-only treatment is NOT a pretty picture.

9) Some patients go to alternative health professionals to get prescriptions for drugs such as desiccated thyroid extract (DTE) prepared from animal thyroid glands, which include a combination of T4 and T3.

Thyroid patients are NOT just getting their natural desiccated thyroid (NDT is the common term, not DTE) from alternative health professionals. They are also getting it from open-minded and progressive regular doctors who LISTEN to their patients experiences!

10) The danger here, Dr. Arem says, is such patients could end up with an excessive amount of T3, resulting in symptoms of overactive thyroids, such as anxiety and a fast or irregular heart rate. He advocates a combination approach with amounts tailored to the individual.

With all due respect to Dr. Arem, who is light years ahead of his colleagues in many areas, an excessive amount of T3 is not because of the use of NDT. It’s because NDT will reveal the problems of inadequate iron or inadequate cortisol–either of which can cause T3 to pool high in the blood and not make it to the cells. When patients correct those, they eventually soar on NDT. A newer page on STTM explains why NDT appears to cause problems.

This is because those doing the studies made several key mistakes!! a) they dosed by the TSH, which leaves patients underdosed, b) they had no clue about the problem of inadequate levels of iron or cortisol, either which will leave a patient hypothyroid! Learn from patients!

12) The study’s authors said in a news release that it showed DTE may be a good alternative therapy for a limited number of patients. Harvard’s Dr. Garber says there may be certain subsets who are genetically programmed to respond to such combination therapies.

That’s like saying a “limited number” of human beings and only those “who are genetically programmed” will do well with a healthy thyroid (NDT gives the exact same hormones as a healthy thyroid!! T4, T3, T2, T1 and calcitonin).

13) Dr. Garber, like many endocrinologists, uses T4 medications with the vast majority of his patients. Occasionally he’ll also use conservative doses of a synthetic T3 drug, but he virtually never prescribes the animal-derived form, he says, because of complications that could arise for women trying to get pregnant or in early pregnancy, as well as individuals with heart disease.

And this is why most thyroid patients, when they report about their doctor experiences, find Endocrinologists to be the worst doctor they ever went to, using descriptive words such as arrogant, close-minded, blind. And by the way, even some heart surgeons know that T3 SUPPORTS healthy heart function, not hurts it! See the Medical Research page on STTM which supports what we already know by our experiences!

* Did you know that the original and revised Stop the Thyroid Madness book is in four languages?? English, Spanish, German and Swedish. Wooo hoooo!! And now, there’s a STTM II book with each chapter written by medical practitioners!

* The STTM Facebook page is very active and informative about successful thyroid patient treatment! Come join us! Discussion groups listed on the Talk to Others page.

10 Responses to “Wall Street Journal’s recent thyroid article: 13 ways it could have been SO MUCH better!”