Skip to Main Content
Home » Janie’s Blog » A Pandora’s Box is being opened, and some thyroid patients will have strong opinions 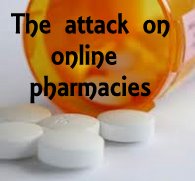 I’ve been lucky. But some thyroid patients have not.

It’s been clear that a certain percentage of thyroid patients, who desire to be healthy and live again after the nightmare of T4-only treatment, have had a hard time finding a doctor to either prescribe desiccated thyroid, or to understand how to dose it even if they did prescribe it. Even harder have been those thyroid patients with adrenal fatigue in finding doctors who understand this widespread and debilitating condition and how to treat it.

As a result of the latter tragedy…and here comes the big elephant in the room…some thyroid patients will state they have felt forced to self-treat and find their needed medications via online websites in order to live again.

And now comes some breaking information that I think all thyroid patients who feel forced to self-treat, and even those who don’t but use legitimate prescription-required online pharmacies, need to read:

You can read more about PharmacyChecker’s opinion about the White House and online pharmacies here and their opinion of Legitscript here. You can read about an investigation request against the president of LegitScrip here and his rebuttal here. I am just now reading about this, and reporting above on what I know right now. I’m sure there is more to come, and I also have no doubt that this is going to produce a lot of discussion and/or action by thyroid patients. If you want to contribute to discussion on this, here is where to go. BUT REMEMBER: unlike what has happened before, let’s keep a level head and stick to facts.

18 Responses to “A Pandora’s Box is being opened, and some thyroid patients will have strong opinions”