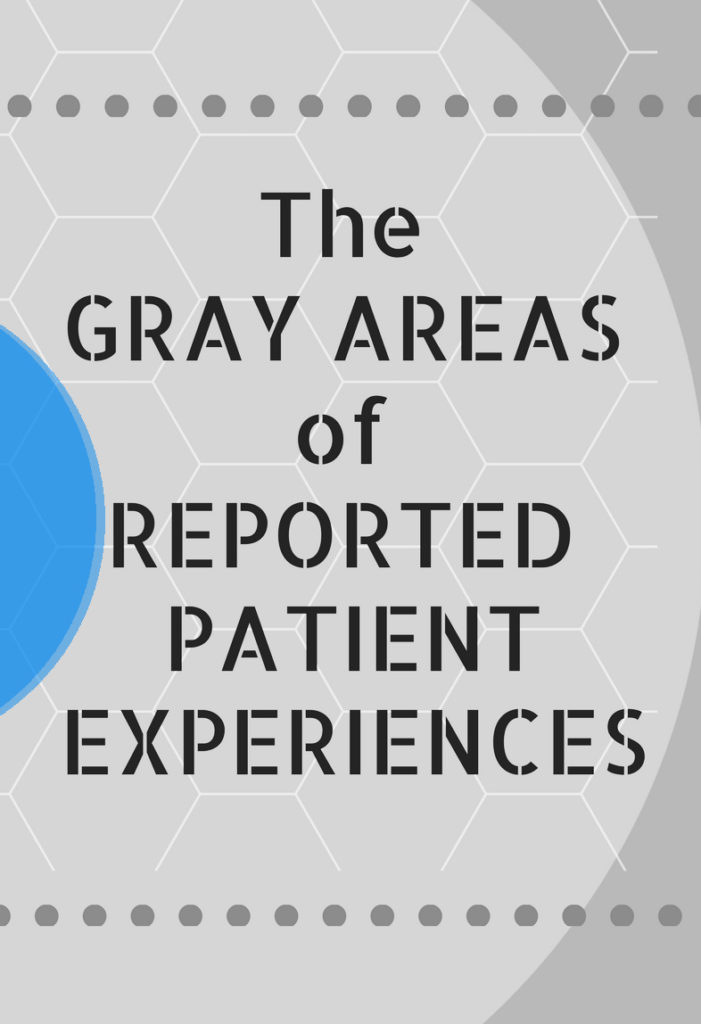 Did you know that years of reported patient experiences, which the Stop the Thyroid Madness website and books are about, has gray areas and has NEVER represented…

Additionally, Stop the Thyroid Madness has…

…never been about making something up based on strong opinion of a group’s owners.

…never, ever been about negativity towards you the patient for daring to think outside the box. It’s that daring that resulted in the very solid information based on our experiences that has been compiled on STTM!

Instead, Stop the Thyroid Madness is a compiled site and books of information about “here’s what patients have reported repeatedly over the years which worked and why that got them well” which is ultimately for you to become your own best advocate as you work with your doctor.

Here are a variety of examples of those Gray Areas of Patient Experiences (with a few Givens) below:

SYMPTOMS of HYPOTHYROIDISM: It varies! For example, while most may see weight gain or difficulty losing, a small minority can’t gain weight at all. Or while many have energy issues, others are fine yet have rising cholesterol or rising blood pressure. On and on. See all possible reported symptoms here.

OPTIMAL AMOUNT OF NATURAL DESICCATED THYROID (NDT): it varies! Though it happens and is rare to be optimal below 2 grains..and maintain it…it can happen. Others (and more than the latter) start being optimal in the 2 grain area. And others are optimal in the 3 grain area. (Janie is at 3 1/2 grains, as just one example) Some are optimal in the 4 grain area and up. On and on. The given: in spite of the different amounts, optimal nearly always seems to put the free T3 towards the top part of the range (notice the word “part”–it’s never an exact number), and the free T4 around mid-range for the vast majority (and this occurs with optimal iron and optimal cortisol–you can’t get optimal without having problems if iron and cortisol aren’t optimal, too.

OPTIMAL AMOUNTS OF T3-only: For those on straight T3, and with the right amounts of iron and cortisol, patients report feeling their best, without any negative results, when their free T3 is at the top of the range, and some report even slightly over. That was huge information. But the gray area was always how much T3 meds achieved that complete removal of symptoms, and which didn’t backfire later due to being on too little. Some see it at 50 mcg; others at 60 mcg, or 70 mcg, or 80 mcg…and some have to get into the100’s of mcg of T3 to finally get rid of al their symptoms and maintain that.

T4-ONLY USE: A strong gray area we noticed: some who started on T4-only like Synthroid or Levo did much better; others never did well from the beginning. But one given that patients on T4 were admitting to–symptoms creep up the longer they force their bodies to live for conversion alone. T4 is not the active hormone: T3 is. And there are too many variable that will eventually inhibit the conversion of T4 to T3. And a healthy thyroid gives some direct T3.

WHEN TO DO THYROID LAB WORK IF ON NDT or T3: No, it’s not about a specific set of hours. For several years now, we learned it’s about taking our meds one day as usual (which is often two times a day for NDT, and three for T3, but there are variations—those gray areas), then doing labs first thing the next morning. Why? After taking either NDT or T3, our free T3 levels are going to peak anywhere from 2-4 hours according to a variety of literature and observations…and then a slow fall for up to 12 hours–also in a variety of literature. We want to see what we are holding onto and doing it the next morning has worked well. The only exception to taking our NDT or T3 the day before labs is that we “may” want to bring an evening dose to the afternoon, just in case. Not set it stone, but we do lean that direction to move the evening dose to the afternoon the day before we do labs. Bottom line: it’s not about a rigid range of hours before doing labs the next morning.

THE TSH LAB TEST: Now it’s a given that using the TSH to diagnose by can leave millions with clear hypothyroidism undiagnosed. Why? It doesn’t rise at first when one is very hypo! Patients have seen that repeatedly over the years. And when an optimal amount of T3 and NDT, it’s a given that for a high percentage, it will be below the range…but the gray area of being below range is where below range it will end up for each individual. P.S. we found it’s never about dosing by the TSH anyway. It’s about the free T3 and free T4, plus removal of symptoms, a good heartrate and blood pressure, etc.

WHO GETS AN ADRENAL PROBLEM: The gray area is that not everyone gets a cortisol problem while being poorly treated on T4, or being underdosed on T3 or NDT. But subjective observation reveals that a LOT do. Here’s a few ways people find out…also check out Chapter 5 in the updated revised STTM book.

SUPPLEMENTS TO LOWER HIGH CORTISOL: No, it’s not taking a massive amount of known cortisol-lower supplements, like five of this along with five of that along with five of another. 15 pills?? No! What a great way to stress your liver. A high % of those trying to lower high cortisol report success doing it on just one particular supplement where the high is occurring. One example is Holy Basil, and as reported for many, just two capsules does the trick for a particular high, or three capsules does the trick. A much less percentage report needing four or so. Some report combining supplements, like one holy basil and one Relora, or two each…etc. It just varies and they all work if enough is taken, is appears Here’s a page about this and there’s even more in the revised STTM book

LENGTH OF TIME TO LOWER HIGH CORTISOL: Lowering high cortisol is typically NOT about taking supplements for months and months (Gray area: high ongoing stress like lyme, poorly managed autoimmune, infections, etc. may required extended treatment). High cortisol can often come down in a matter of a week to a few weeks. We also treat the cause while lowering it.

OPTIMAL AMOUNTS OF CORTISOL SUPPLEMENTATION: Gray areas! With HC (prescription hydrocortisone given via your doctor) and women, it appears the majority end up at 30 mg (after doing DATS aka Daily Average Temps as we learned from Dr. Rind). But some find their optimal amount at 27.5, for example, and perhaps a smaller bunch right at 25 mg. Some even end up 32.5…all the latter after doing those Daily Average Temps to find their correct physiologic amount. It’s not as common, we’ve noticed, for a woman to need 35 mg, but we figure it could happen. Note that for what appears to be many, if they are going up that high, it’s because they have inadequate aldosterone that needs discovery and treatment.

OPTIMAL AMOUNT OF IRON: Over the years, it appeared to female patients who reported back that optimal for their serum iron seemed to be “close to” 110 in those kind or ranges, or “around” 23-24 or so in those ranges which only to up to the upper 20’s. Note the qualifications with quotes–those gray areas. For example, with the first range, some were just fine at 107, or 106, or 105, and etc. Gray areas for iron.

HAVING HYPER-LIKE SYMPTOMS: this seemed to be an area that had different causes–those gray areas. For some, hyper-like symptoms were due to having low cortisol, causing a release of adrenaline. Some, though not all, felt them with high cortisol. Another cause of hyper-like symptoms: just being hypothyroid due to being undiagnosed, or being on T4, or being underdosed on NDT or T3, releasing excess adrenaline. And another gray area was how people experienced the high adrenaline. Some state anxiety feelings; some state palps; some state high heartrate; some state shakiness; some notice little. Please, if you ever had concerns about your heart, we hope you will work closely with your doctor.

HASHIMOTO’s: Here contains a little gray area…Namely, though the vast majority will have antibodies to prove they have Hashi’s (both the anti-TPO and the anti-thyroglobulin are needed, we have noted, NOT just one of them–a given), there’s this small body such as 5% who have none! The latter has to prove it via an Ultrasound!

HASHIMOTO’S AND IODINE: though some overreact to the detox from iodine and see their antibodies go up, another body has stated that it was iodine alone that brought their antibodies down! Gray areas! The bottom line: many have to prepare for the detox better–see this. And some have to go low and slow. Read iodine information from experts like Dr. David Brownstein, Dr. Guy E. Abraham, Dr. Jorge D. Flechas..

HASHIMOTO’s AND GLUTEN: Yes, though it has always appeared that the vast majority need to be off gluten, as it makes the antibodies worse as well as inflammation, there have always been a small minority who had no negative issues whatsoever with gluten and haven’t for a long while. Gray areas! As always, there are strong opinions, but it doesn’t take away the facts that some do fine. But everyone should decide for themselves.

LYME DISEASE: One given is that for all too many with “active” Lyme, patients noticed their RT3 went up and up from either T4-only or the T4 in NDT. That only makes one more hypothyroid since RT3 is an inactive hormone. So many have stated they lowered their NDT or T4 to a small amount and made it up with the majority being T3. Some are on T3 alone. And the gray area?? A small body of Lyme patients on T3 seemed to report needing that free T3 slightly above range, even if others state they were doing okay with it slightly below but “towards the top”.

The above is just a partial list of the gray areas in patient experiences. It’s not all black and white, rigid, or rule-bound as it can often be reported in some groups. Hope that helps! Use STTM to work better with your doctors!

NEED A GOOD FACEBOOK GROUP TO DISCUSS ADRENAL AND/OR THYROID ISSUES? Here’s a privately run group that is positive on both the public side and the private side, has great integrity, and has an easy going attitude that a lot of people sure do seem to like: https://www.facebook.com/groups/AdrenalFatigueandThyroidCare/ NOTE: this is a large group, so be patient with being approved, and patient with getting your question asked. It’s worth it, as unlike other groups, they stick to solid patient experiences and don’t make things up.

102 Responses to “The Gray Areas of Reported Patient Experiences”