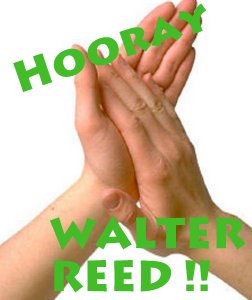 Patients have known by their experiences the past 110 years that natural desiccated thyroid (NDT) was safe and effective.

Yet it took a recent study at Walter Reed Military Medical Center, and lead by the U.S. National Institutes of Health, to proclaim what patients already knew: Desiccated thyroid extract a safe alternative to levothyroxine in hypothyroidism, as reported on Endocrine Today. Good for Walter Reed Military Medical Center and Thanh D. Hoang, DO, the staff endocrinologist who reported it:

In other words, those doctors throughout the years…and especially negatively-biased Endocrinologists…who have outright proclaimed that NDT was….

…might want to eat a bit of the dirt from that potted plant in their office’s waiting room.

In all probability, there were several patients who had either low iron or a cortisol problem—a common problem for many hypothyroid patients who’ve remained undiagnosed with their hypothyroidism. And with either or both, patients don’t do as well on NDT until they optimize either. And once they do, patients have soared on NDT, as reported for more than ten years!

Also, the TSH lab test was used in this study, and if patients are kept in the TSH “normal” range, they don’t do as well ! Dosing NDT should have NOTHING to do with a pituitary hormone lab result, we have learned over and over.

Bottom line: we might have seen that 48% much higher if the above had been recognized. But frankly, the results of this study are still POSITIVE and underscore what patients have already known and experienced for a long, long time!! Hooray!!

the Spanish version of the Stop the Thyroid Madness book being out, I could use help in reaching folks who really don’t understand English well-enough to know why they are having problems with their thyroid treatment.

Please consider posting the following on your Facebook page to help reach your spanish-speaking friends from the misery of being undiagnosed or being on T4-only meds like Synthroid:

EVEN WITH DAILY SUPPLEMENTATION, MY OWN VITAMIN D LEVEL FELL

I found myself with a Vit. D level of 45 two weeks ago. That was a shock considering I have been supplementing with 5000 IU’s almost daily and it was, in fact, lower that last time I checked. Sure, there have been intermittent periods where I would run out of my supplement, or forgot it on a vacation. But this was a drastic drop…considering. And my progressive doc wondered out loud if

something is going on out there, as she’s seen this with several of her patients.

Granted, we know that one culprit which is huge for thyroid patients is low stomach acid. But are there other causes? Possibly.

In 2011, the National Center for Health Data reported on 9 reasons your D levels can fall. They include living in higher latitudes, pollution, having darker skin, obesity, and getting older. Two other important reasons include gut problems or kidney/liver issues. i.e. if your gut is compromised due to low stomach acid, Celiac, or any other digestive/absorption issues, you will probably need to keep a close watch on your levels and supplementation. And a stressed liver is not helping you either. That’s where doctors will test your ALT and AST to gauge the stress level of your liver.

WANT TO SEE MORE MEDICAL STUDIES WHICH SUPPORT WHAT WE ALREADY KNOW?

STTM has a page showing several medical research studies which you might enjoy, and can use with your narrow-minded, research-obsessed doctor.

**Have you Liked the STTM Facebook page? You’ll get daily tips and information!