Skip to Main Content
Home » Stories of Others » Shari’s Story

Shari is a sweetheart and this is very moving story! She went from being an energetic but hypothyroid young woman, to being on Synthroid for ten years and feeling okay, to the lowest of lows….finally to be put on NDT and treating adrenals with fabulous results over time!

When I was in my early 20’s, I was in very bad shape. I had the shakes so bad that I couldn’t even get a spoon to my mouth. I was losing weight….my heart was racing…..I had buggy eyes….I was a complete tyrant…..I was so hot all the time that I would sit outside in -30 C weather without a coat and still would be sweating. The one good part: I was like the Ever Ready bunny! I had a ton of energy!! I was young, just married and had no idea what was going on. My poor husband was completely shocked at my rages and I’m sure he was tempted to run and often thought “what/who the hell did I marry?”
One day I came across an article about thyroid conditions in Chatelaine and it clicked. Off I went to my doctor with the article in hand. He ran some tests and I was diagnosed with Graves and he sent me to an Endo. I had my RAI shortly after (around 1984). Not too long after the RAI, I began to gain weight, had extremely dry hands, not an ounce of energy, and I even fell asleep at work a few times (right at my desk). I called my Endo…he took one look at me and put me on Synthroid.

For the longest time I felt ‘ok’. About 10 years ago things began to change. I became depressed and very angry. My energy was dwindling. But I kept plugging away and never really connecting the pieces. I went to see the doctor and he put me on anti-depressants. Work was horrible; many times I sat in my office and cried. I ran away from home a few times and ended up hiding out in hotel rooms – not telling anyone where I was. I was suicidal and came so close a few times. I woke up one morning in June of 2012 and decided to quit my job. I went in that day and just gave my notice. I had a very good job (HR Officer) and had been there for 17 years. I never went out and pulled away from my friends. My life was falling apart. I had absolutely no energy, no desire to do anything, no hope, no drive.

The summer of 2013 I came across a thyroid website and had my ‘aha’ moment. I made an appointment with my doctor and asked him about switching me over to NDT, but he didn’t want to. But to be honest and fair to him, I didn’t go in fully prepared. All I really talked to him about was something that I had heard about. Of course he rolled his eyes and thought I was nuts. I was hyper via the TSH, he thought, so he switched my meds yet again (from .15 to .125 which would have sent me back to a hypo state) and gave me a requisition for blood work (only TSH of course). So I left his office completely discouraged and lost and did something very drastic and I don’t recommend it: in September 2013 I tossed both the Synthroid and the anti-depressants out.

I had given up and no longer cared what happened to me. I think I also was crying for help and hoping to get someone to sit up and say “this girl needs help”.

In end of November I went to see an ND and she ran all the blood work recommended by STTM and did a 24 Hour Cortisol Saliva test. TSH result was >150; Free T3 was <1.5; Ferritin was 20 (over the years it has been as low as 7)…all numbers were a disaster and I was in advanced stages of adrenal fatigue. But she wasn’t able to prescribe NDT, so I took the blood requisition that my family doctor had given me and went and had that done, knowing he’d at least see the TSH at > 150. (I couldn’t tell him that I had been to an ND)

I was so sick…..in so much pain….so swollen. I hated myself.

My doctor got the results from his requisition and called me in immediately. He took one look at me (that’s pictures # 2 and #3) and was so shocked at the shape that I was in and said “You must feel like crap”. This time I came prepared….I had information….I had researched and did my homework. We talked about NDT and he said he had only prescribed it once before and it didn’t work for that person. But he agreed to let me try and gave me a prescription. I then needed to find a pharmacy who carried it. I did some calling around in the city closest to me and no one carried it – some didn’t even have a clue what I was talking about. I called the local pharmacist in my teeny town and wouldn’t you know it…..he carried it!! I went in with my prescription (he had talked to my doctor earlier and my doctor had told him my TSH level) and the pharmacist said to me….You must feel like crap” lol. I started NDT on Dec 26, 2013 and I also started on Adrenal Cortex.

My doctor gave me a repeating blood test requisition for a year and noted on it that I was allowed to call LifeLab for results. I kept records of what levels I was at…how I was feeling and charted my results. It didn’t go all so well. I was still suffering from AF and low levels of iron. I kept reading what everyone had to say in the Facebook FTPO groups (adrenal, thyroid, etc). Someone would mention something, and I’d run off and buy whatever they suggested. My shelves were full of vitamins, oils, etc and my wallet was empty. I was spinning my wheels trying to fix myself and getting depressed when the next ‘new idea” wouldn’t work. I went back to my doctor and told him I was ready to give up and go back to Synthroid and wanted to try the .137 mg dosage. He told me no…..let’s keep going (wow!!). In June 2014 I switched NDs and I asked my family doctor if he’d work with this one and he agreed.

This new ND has MS and was told many years ago by several doctors that there was no hope. He told them all to ‘f off’ and took care of himself. He now has 2 children and a flourishing practice and is doing very well health wise. He ran more tests and did a live blood scan. I had no nutrients in my body and I also had candida. We both agreed to start from the beginning….keep it simple and deal with one thing at a time. He also kept telling me that he’s cheap and doesn’t believe in spending a ton of money on hopes and dreams. That was very reassuring.

So I tossed all meds and vitamins and whatever else I had bought into….and only stuck to the NDT and Adrenal Cortex. I also have to admit that I left this FB group and all the other related ones (adrenals, sex hormones, etc). I needed a clear head and needed to start fresh and on my own and I had to stop chasing every idea that someone mentioned in here.

But I kept going and it just slowly started to come together and I slowly began to feel better. Key word is slowly and gradually. Out of the blue I realized my heart no longer raced or skipped beats. Next I noticed my hair was better and there was hardly any in my brush. Then I noticed my moods were better. Next…the swelling went away and my skin began to look much better. Bags under the eyes went away. But it took time…a lot of time and it was so gradual that I wouldn’t notice things right away. I’d all of sudden stop and think…huh…that symptom has disappeared….or hmmm….this feels so much better. I’ve stopped doing the blood work – the last one that I had was June 2014. I just go by how I feel now.

One new thing….last summer when I was ready to go back to Synthroid….my doctor decided to run tests for other things….ie lupus, celiac, etc. Blood work came back positive for celiac. I went for more testing (genetics, more blood work and an endoscopy). I just got the final diagnosis for Celiac last month. So I’ve been Gluten Free now for almost a month. Soon my intestines will be healed and my iron and nutrient levels will improve. I expect to feel even better by the summer!!! I’ve already lost 8 lbs!! 🙂

So…as you see…there’s no real miracle cure here. I’m very sorry but there’s really nothing specific that I can point to and say…”do this….that’s what helped”. I wish I had something specific to tell you. All I can tell you is please don’t give up. Keep going. Educate yourself. Take baby steps ….don’t fall into the hype and chase the ‘magic cures’ and don’t try to fix it all at once. It will only depress you even more when that ‘magic cure’ doesn’t work and you will only get confused if you listen to everyone and try to do everything at once. If you are still on synthetic thyroid meds….get off of them and switch to NDT!!! Listen to your body….perhaps play with your NDT dose…split the dose…..try it at different times. At one point someone in this group told me to lower my NDT…I thought they were crazy but I listened…and over time…it worked!!! But….it took time! Remember….it took years to get to the state that you are in…..and it will take a very long time to get well again. Don’t try something and expect results in a few days. Don’t get discouraged. Keep the faith and keep positive. If you have AF….rest…..allow yourself to rest. Once you begin to feel better….get dressed. Get your hair done…..put your makeup on….get out there. You will need to push yourself to fix yourself mentally. Get back to going out with your friends….get a social life. By the way….I’ll be 54 in July.

Shari about ten years ago while on Synthroid

Shari about three months after tossing the Synthroid and anti-depressants 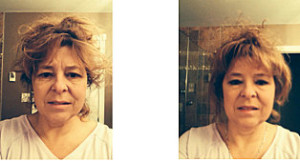