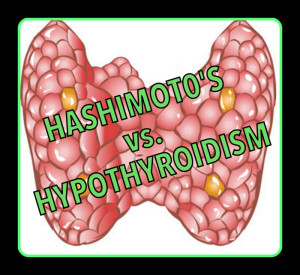 It’s frequently asked in patient forums: why do some people have a Hypothyroid diagnosis, and others have a Hashimoto’s diagnosis?? Aren’t they the same…or not?

About Hypothyroidism that isn’t autoimmune in nature

Hypothyroidism means your thyroid isn’t producing enough thyroid hormones. And in many cases, the cause can be genetic (a thyroid problem passed down via your genes, such as a deodinaise problem). This was apparently true of the creator of this site, Janie Bowthorpe. Or, you could be severely iodine deficient, since thyroid hormones need iodine to exist. Or it can be caused by hypopituitary, or a traumatic physical injury to your neck and head, or from the removal or radiation of your thyroid gland, or from Lyme, or from toxins…on and on. STTM has listed several causes, and the STTM book has even more.

About Hashimoto’s Disease, which is autoimmune in nature

Hashimoto’s (also called Hashi’s) is an autoimmune problem, meaning your gland is being attacked by your own confused immune system. Either the protein in your thyroid called “thyroglobulin” is being attacke (anti-Tg), or the thyroid enzyme “peroxidase” is being attacked (anti-TPO)…or both. Both can result in thyroid cells being destroyed over time, so you can vacillate between hyper symptoms due to the dumping of thyroid cells in your blood (anxiety, higher heartrate, etc) and hypo symptoms due to having less thyroid (fatigue, depression, sluggishness. Having enlarged, non-cancerous thyroid nodules are common, as experienced by many Hashi’s patients, as well as stated by well-known clinics–the latter who might say up to 95% are non-cancerous.

So in a nutshell:

Hypothyroidism defines a state of sluggish thyroid function and metabolism.

Hashimoto’s defines an autoimmune disease process which can result in symptoms of hypothyroidism.

It’s stated that there are far more patients with Hashimoto’s than simply non-autoimmune Hypothyroidism as defined above, but it’s doubtful that Hashi’s comprises 90% of those with hypothyroidism, as is so often quoted. We are seeing more and more patients just with regular hypothyroidism, possibly due to all the toxins we are exposed to in our food, water and air, activated gene mutations, and/or less iodine in our soils which can negatively affect thyroid function.

What is similar about both?

What is dissimilar about both? 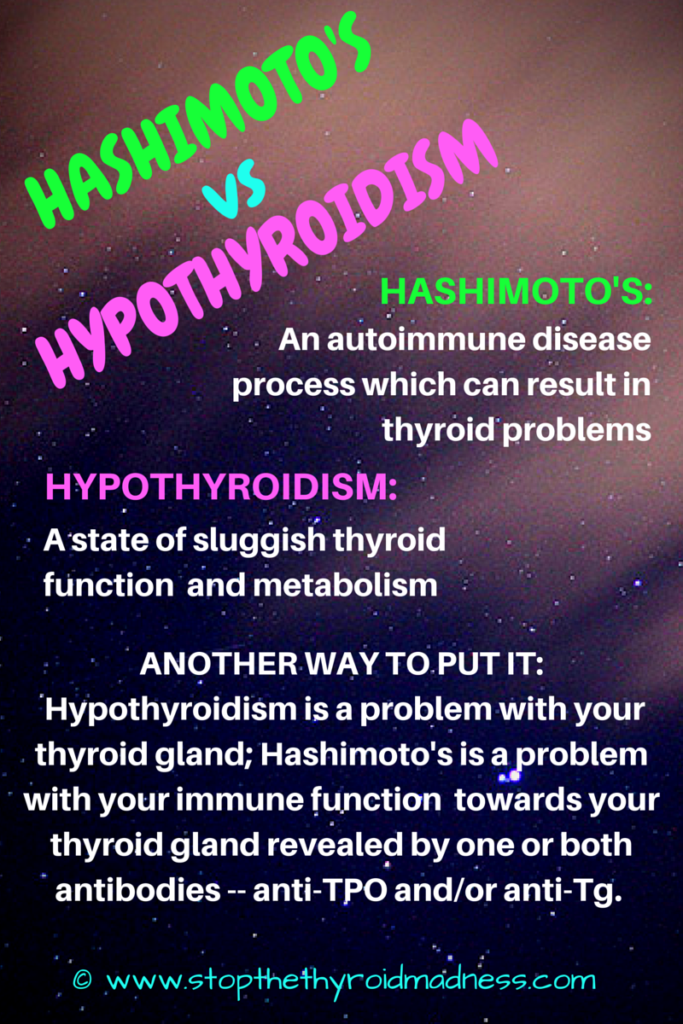