Chris’ explanation of the ACTH STIMULATION TEST (aka STIM) 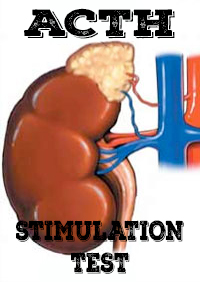 Keep in mind these are my opinions and I’m not a doctor.

The ATCH stimulation test, also called a Synacthen test, measures how well your adrenals can respond to stress by testing the amount of cortisol the adrenals produce after being stimulated by a synthetic form of ACTH. The real ACTH is a messenger hormone released by your pituitary to stimulate the adrenals to release cortisol.

This is a simple test helps differentiate between…

a) having a problem right in the adrenals themselves like Addison’s, versus…
b) having hypopituitary and failure to release the ACTH.

In secondary adrenal insufficiency, which points to the pituitary not releasing enough of the ACTH, the base cortisol can double from a low base value and I’ve seen tripling, quadrupling, quintupling (5 stimming to 25, 6 stimming to 30), sextupling (4 stimming to 24, 5 stimming to 30), septupling (0.7 stimming to 4.9) and decupling (2 stimming to 20, 2.7 stimming to 27.6) and recently a stim that almost tridecupled (1.25 – 16 went up 12.8 times) and a stim that quadecupled (went up 14 times 1.7 stimming to 24, after 1 1/2 hours reached 27.5 for sexdecupling). These latter examples illustrate how extreme secondaries stims can be. Most secondaries only double or triple and usually start with a base cortisol value of at least 10. The base cortisol can be very low because of the bodies lack of natural acth. When the synthetic acth is given in the stim test, the patients adrenals go hog wild because they can work, just not getting enough ACTH from the pituitary gland.

Some people have reported their first ACTH stim doubled or more from a low number, but then another ACTH stim done later, the test suggested they are really primary (stim didn’t even double). I’ve seen many say their doc changed their diagnosis from secondary to primary “I guess you were primary the whole time”. In secondaries, if the adrenals lack acth stimulation for enough time, the adrenals cortisol production can atrophy, thus no longer rise in an ACTH stim test, with serum acth being in the lower half of the range. So arguably that would be a combination of primary and secondary, but is more correct to continue with the secondary AI diagnosis.

The acth test is usually the final say in whether you have adrenal insufficiency, but most docs are looking for just Addison’s disease with the stim test. If the test does not show Addison’s (for example, in true Addison’s, the stim may start at 3 and rise to 4 or 6 rising to 8), then they see the stim as showing the adrenals are working. They fail to recognize any degree of adrenal insufficiency between Addison’s and healthy adrenal function. In others words, these docs see the adrenals as working or not working with no in between. I’ve seen reported docs only looking at how the stim doubled or more, not taking into consideration that the base number was very low and do not consider that the test reflects that their acth signal isn’t working. Some docs actually think tripling or more from a low base number is just terrific. Those docs don’t know what they are actually looking at.

The serum ACTH test should always be given at the same time as the ACTH stimulation. The serum test measures how much ACTH the pituitary is releasing. Acth serum and acth stim together can give a clearer picture, especially if one is secondary. Some doctors think serum acth is not accurate, but I’ve seen well over 1000 of these tests and I believe serum acth is a very good test. Insist on this test and if your doc won’t give it to you, try another doc, preferably an osteopath, or find any good doc here.

In primaries, ACTH serum will be at the top of the range or above range, sometimes way above as I’ve seen a few acth serums that were in the hundreds and a handful in the 1000’s.

In secondaries, serum ACTH will usually be in the bottom half of the range to the very bottom, but not usually below the range (98% of secondaries are in range on the serum acth). I have seen a few secondaries (going by stims doubling or more from low base number to indicate they are secondary) whose serum acth was just above the middle of the range or as high as the 40’s. Again, I like to see it in the upper third of the range (assuming a range of 10 – 60 as they almost always were until a couple of years ago), but now many different ranges are popping up and most are flawed to the lower end of the range ie. 5 – 27 which is the range where most secondaries test at in the serum acth test. Further proof that the labs get their ranges from the sick people who are given the test. In my opinion, acth ranges have become even more flawed compared to what they were before. If I were to draw up a healthy range for the serum acth, I think a range of 48-55 would likely be closer to healthy range.

A short ACTH stim is a 30 minute test. A long ACTH stim measures one’s serum cortisol concentrations over 24 hours minimum. Info varies in opinion, but it appears the short test works well enough for most to distinguish between Addison’s disease (a problem right in the glands) vs hypopituitary (poor release of ACTH by the pituitary gland). Otherwise for some, a long term stim may be a better choice if there is any suspicion of Addison’s, even if the short seems very adequate, say experts.

NOTE from JANIE BOWTHORPE, the creator of Stop the Thyroid Madness: From years of observations and reports by patients, most thyroid patients who get low cortisol do not have Addison’s, which is a long-term disease/disorder of one’s adrenals ability to produce cortisol. Only a minority have hypopituitary. Most thyroid patients with low cortisol due to potential actions by the body to bring down what was at first high cortisol. Cortisol issues that thyroid patients get seem to be occurring due to being undiagnosed, or treating one’s hypothyroidism with Synthroid or Levo, or staying underdosed on T3 or Natural Desiccated Thyroid. See the brilliant last chapter in the STTM II book as to why we get low cortisol, written by Lena D. Edwards, MD. If you have any reason to suspect it’s actually Addison’s or hypopituitary, please work with your doctor.