Skip to Main Content
Home » Why have millions of patients been treated with Radioactive Iodine?

Why have millions of patients been treated with Radioactive Iodine? 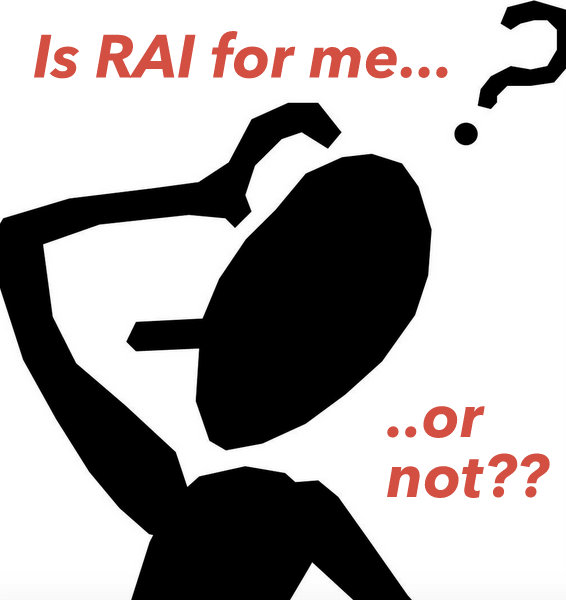 The following article has been written by Tracy, a former thyroid cancer patient who was treated with Radioactive Iodine treatment (RAI), also called I-131. Please understand it’s her opinion, and it’s NOT meant to tell you what is right or not right for YOU. Work with your doctor and decide what’s right for you!

RAI treatment for thyroid cancer and Graves hyperthyroid: The standard treatment for the majority of thyroid cancer patients involves removing the thyroid gland and administering one or more rounds of radioactive iodine (RAI or I-131) to eliminate any residual thyroid tissue remaining in the body. Radioactive iodine is created when the unstable atoms of radioactivity is piggybacked onto iodine so it will be absorbed by the body. This is usually put into pill form for patients to ingest. Doctors tell cancer patients that the thyroid is the only tissue which takes up iodine, thus making this a safe form of cancer treatment that will not harm the other tissues of the body. It has the added benefit of killing any cancerous cells that may have been missed during surgery. Thyroid cancer patients are also frequently advised to have radioactive iodine scans at periodic intervals to make sure they are “clean” and cancer free.

For years thyroid patients have been told that RAI is completely safe, presents very little risk of further health problems, and is the insurance policy against heart problems for Graves’ patients and cancer recurrence for thyroid cancer patients. We have been told that only the thyroid takes up iodine, so the RAI will not possibly affect any other part of the body. But is this true? Do the experiences of patients bear this out in reality?

Some of the very real side effects of RAI experienced by patients:

1. The skin on the body peels off in a similar fashion as mild sunburn. This may include the mucosal linings.

3. Very swollen and painful salivary glands for a month. Some patients experience this years after RAI, and some have the loss of salivary gland function for life.

4. Digestive problems including food not being properly digested, constipation, or extreme diarrhea for long periods of time.

5. Sudden onset of allergies or food sensitivities including the inability to eat gluten.

6. Iodine deficiency due to low-iodine diet prior to RAI.

Graves’ patients have an added problem of becoming newly hypothyroid. The process of testing thyroid levels, adjusting thyroid hormone dosage and dealing with hypothyroid symptoms begins for many after RAI ablation. Patients have reported sudden weight gain, digestive changes, skin changes, and other common hypothyroid symptoms after undergoing RAI for hyperactive thyroid disease. It is quite a change for these patients, and must be considered as a long-term result of RAI.

Another long-term affect of RAI in Graves’ patients also includes Graves’ eye disease which actually worsens for many people after radiation treatment.

Doctors are wrong when they tell patients that iodine is only used by the thyroid. In fact, iodine is used by the thyroid, breasts, brain, heart, gastrointestinal system, skin, ovaries, lungs, eyes, mouth, bones, blood, and is used in the production of hormones and is accumulated by the immune system. 2

Why did I have RAI?

I decided to have RAI to stop any further thyroid tissue or cancer from growing in my body. It was a very tough decision to make because I was so afraid of radiation, and it turns out that I was right to be afraid. In my experience, there was fear in every part of the decision to have, or not to have, RAI. For me, it was the possibility of an incurable recurrence that eventually led me to have RAI.

My special kind of cancer was follicular with a hurthle cell variant. My doctor told me that hurthle cells don’t usually take up iodine, but that there was a chance that I might be one of the few with hurthle cells that would respond to the RAI. My doctor also wanted me to have the RAI done to clean up any “background noise”, as she called it, from remaining thyroid cells in my neck. With those cells gone, detection of recurrence would be much easier.

As I write this, it has been 10 months since my RAI. I have suffered through most of the very real side effects listed above. I still deal with very swollen and painful parotid glands, digestive problems and renewed allergies. Even after going through allergy shots previously, my allergies did return after RAI. My immune system took quite a hit and I was continually sick for two months. A weakened immune system is a known side effect of RAI–my nuclear techs warned me not to be around sick people and avoid church for a period of time to protect myself. (What worked to heal my immune system was zinc and vitamin C.)

Additional problems which presented following RAI were hair loss (which is now starting to grow back) and sores on my tongue. I find that I am very sensitive to acidic foods now, although this has never been an issue with me prior to the cancer treatment.

My doctor told me I need RAI. What should I do?

This is a question that tens of thousands of Americans must answer each year. For most, the choice is to proceed with RAI. For cancer patients, RAI is seen as the best guarantee against future cancer and an insurance policy for future health. For Graves’ patients, it is seen as the cheapest and quickest method of “curing” hyperthyroidism.

Thyroid cancer and hyperthyroidism come from underlying health issues. Instead of uncovering and healing the underlying problems, the body is radiated. Eliminating the thyroid tissue doesn’t eliminate the reason for the illness.

It is reported that most patients have no major problems or complications post-RAI. I have not met or spoken to a person who has gone through the RAI experience without problems or side effects. Side effects come as a surprise to many, considering the fact that many doctors don’t inform their patients of the problems radiation can cause in the body. I was only told that my salivary glands would swell and that I would have a slightly increased risk of bladder cancer if I didn’t drink enough during the treatment. I had no idea that my skin would peel off or that my hair would fall out. How would I know that gluten would become a problem for me, or that I would be plagued with salivary problems for months to come?

NO ONE TOLD ME THESE THINGS.

It is my opinion that the patient should be well informed of ALL the facts, benefits and potential problems surrounding RAI. Only then, can a patient make the best possible decision and have “big picture” thinking regarding such an emotional issue. Many doctors, including so-called thyroid cancer experts, categorically deny any adverse reactions to RAI with the exception of salivary dysfunction. Those treated with RAI know better.

What are the alternatives to RAI?

There are a growing number of patients using iodine supplementation to treat thyroid cancer, or recurrences. Iodine-literate doctors around the country are seeing success as their patients are able to combat cancer and other serious medical problems through iodine supplementation. Some patients are starting to recognize the correlation between iodine deficiency and cancer BEFORE their nodules become cancerous, and are having success in shrinking nodules with iodine and thyroid supporting nutrients like selenium. Selenium is an important thyroid supporting nutrient and deficiencies have been linked to thyroid cancer. Others have seen their cancer markers decrease when supplementing with iodine after RAI didn’t fully eliminate the cancer from their bodies.

Detoxifying the body is another important step in fighting any type of cancer, or preventing recurrence. Pesticides, heavy metals and other environmental toxins undoubtedly contribute to the increase in thyroid cancer cases each year. I was surprised to find that I had heavy metals in my body!

The National Graves Disease Foundation lists anti-thyroid drugs and sub-total thyroidectomy as standard alternatives to RAI (which is also listed as a standard treatment). For patients who want to avoid anti-thyroid drugs, RAI, or surgery, alternative treatments using magnesium and iodine could be successful according to Dr. Guy Abraham.4 Other treatments used by patients with hyperthyroidism include using L-Carnitine, Magnesium and Calcium to help reduce thyroid activity. 5

It is important that thyroid patients have the WHOLE STORY about RAI, aka I-131. There are real and unpleasant side effects that most doctors don’t reveal to their patients. I have heard many stories from cancer survivors and Graves’ patients who felt pushed and confused, and had no idea what treatment to choose. For many patients, iodine deficiency is a possible cause for cancer and autoimmune disease. Addressing deficiencies and detoxifying the body can be an option for patients who do not chose RAI. For those who are candidates for RAI, please look at the alternatives as well. Once you swallow that pill there is no turning back. As a 3-time RAI patient recently said, “You can never expect to be 100% after taking a toxic substance meant to kill off part of your body.”

I regret my decision to have RAI. Healing and recovering after RAI is a slow process. I am still trying to recapture a sense of normalcy in my daily life nearly a year later. The healing process after RAI is still continuing. I see my health as a jigsaw puzzle with each piece being identified and placed together before the picture of wellbeing is finally revealed. It is my hope that my experiences can help others who are faced with tough choices in their own thyroid treatment.

Get your own labwork here.

Can RAI cause secondary cancers?

See what you think here. The latter information states: “Second cancers have also been known to result from the radiation and chemotherapy used to treat a primary cancer. Studies of pediatric cancer survivors have provided much information concerning the relationship of therapy to second neoplasms because of the young age at diagnosis and the high cure rates following successful therapy. As therapy becomes more intensive for adults as well as children and cure rates increase, we may expect a resultant increase in toxicity, including second cancers. It should be emphasized, however, that most second cancers occur naturally and randomly in cancer survivors, and so are a sign of improved survival following the first cancer diagnosis. Fear of a second primary should not outweigh the use of curative therapy for the first cancer.”