About the different types of hypothyroid medications

T4, a storage hormone, is one of five thyroid hormones, which includes T4, T3, T2, T1 and calcitonin. It’s meant to convert to the active T3. But in a healthy thyroid, you are not forced to live for conversion alone–you also get direct T3. Some state they notice improvements on T4-only, while others state they never notice any improvements. But the common thread with the vast majority who force their bodies to live for conversion alone is that sooner or later, it backfires, leaving you with lingering hypothyroid symptoms and problems which vary from individual to individual. Many also report finding themselves with adrenal problems from being on T4-only, as well as lowered nutrients like iron, B12 and more. T4-only meds are taken once a day. They are the most problematic of hypothyroid treatments, based on years of patient reports and experiences. Read Chapter 1 in the revised STTM book–it will open your eyes. For more info, go here.

This medication represents the active thyroid hormone T3–the hormone which brings back energy, metabolism, good health, etc. A healthy thyroid also gives direct T3 in addition to conversion of T4 to T3. If one is on T3-only, it’s generally taken three times a day, such as morning, then four hours later, then four hours later. Some will take a tiny amount at bedtime, but it’s individual. T3-only has a short half-life, thus multi-dosing. Using T3-only is about finding one’s optimal dose, which tends to put the free T3 at the top of the range, but optimal iron and cortisol levels are imprortant. If one raises T3-only without having optimal levels of iron or cortisol, the free T3 tends to go high without relief of symptoms, or RT3 (inactive hormone) climbs. Treatment with T3 is never about the TSH, which will drop quite low and is not a problem as doctors wrongly claim. It’s a rougher treatment than having some additional T4 in one’s treatment, but can work quite well, say patients. Some people will add T3 to lower doses of NDT (#4 below) if they find themselves with high reverse T3, the inactive hormone—which will go up due to inadequate iron levels (not ferritin, serum iron!), or chronic inflammation, or Lyme disease, etc. Others have RT3 so high that they go solely on T3-only for awhile. 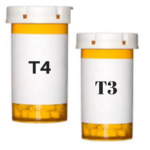 These are generally combined and taken twice a day at a minimum to spread out the direct T3, such as first thing in the morning, then early afternoon. Works well if raised to find one’s optimal dose, the latter which puts the free T3 towards the top part of the range and free T4 mid-range. Optimal will also lower the TSH quite low, which is NOT a problem. Important to have adequate iron and cortisol to avoid problems with raising. Preferred by those who might have reasons to avoid porcine or bovine meds as in #4 below. Also used by those when doctors are clueless about Natural Desiccated Thyroid. 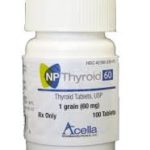 NDT has been around for decades–since the late 1800’s. Most NDT comes from porcine (pig) thyroid; many over the counter versions come from bovine (cow). It contains all five thyroid hormones, T4, T3, T2, T1 and calcitonin. NDT powder, used to make the pills, usually meets the strict guidelines of the US Pharmacopoeia. Good iron levels and cortisol are important to avoid problems when raising NDT (or T4/T3). Optimal puts the free T3 towards the top of the range and the free T4, midrange. The TSH will fall below range on NDT and contrary to the poor training of many doctors, is not a problem. Study Chapter 2 in the revised STTM book about NDT. More here. Note: one of the brands called Naturethroid is now weaker than it used to be.