Benzos: one woman’s research and experience 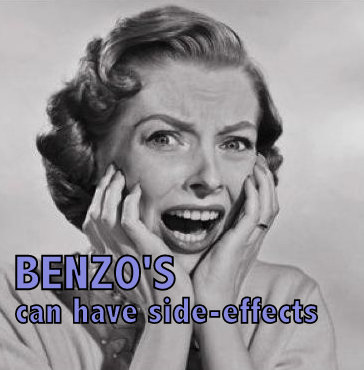 The following article was written by thyroid patient Jeri as a collection of information about Benzodiazepine medications (examples include Valium, Xanax, Ativan, Klonopin, Serax, etc.), as well as her own experiences and opinion. Discuss this and work with your doctor!

Having developed a thyroid issue, I came across several websites and groups with wonderful people who have been very helpful in sharing their stories.

In those conversations, I am finding that many people with thyroid issues are also taking benzodiazepine medications, aka “benzos”, such as Valium, Xanax, Ativan, Klonopin, Serax, etc. There are several others, and a more comprehensive list with equivalencies is available on the Benzos website. I wanted to share some information about these medications, because above all else, when it comes to decisions about our health, the most important thing is that we be thoroughly informed when making them.

The important thing to know is that these drugs are highly addictive and must be tapered off of very slowly. They are said to be more addictive than heroin, can be much harder to come off of, and can lead to a plethora of other health problems. Often, these side effects go unrecognized by doctors because they are not provided the information about them by the drug companies as they should be. Gwen Olsen, called the RX Reformer and who spent 15 years in the pharmaceutical industry, created a video about this very problem with medications.

Please note that I am referring here to those people who take benzodiazepines as prescribed by their doctors. People who stick to their prescribed doses as they are instructed to, NOT people who abuse benzos or obtain them illegally.

Side effects of Benzos

When the side effects of taking benzos start to crop up, many doctors often mistake them for a worsening of the condition they were originally prescribed them for, or for other diseases, both mental and physical. This in turn leads to you being attributed diagnoses you may not actually have. Then you go down the road of unnecessary tests and/or treatments, possibly leading to a further deterioration of your health.

Many women, for example, have had unnecessary hysterectomies because benzos can cause problems with the hormone system, interfering with menstruation. There is an article on this in the February issue of The Journal of the American Medical Association (JAMA). 1961, about Menstrual issues and Benzos. I doubt there are 5 doctors practicing in the United States who are aware of the link between menstrual issues and benzodiazepines. I personally know of at least 10 women who have had unnecessary hysterectomies possibly due to these drugs, including both myself in 1999, and my own Mother in the early 1970’s.

The above journal article was written six months before I was born, yet I still had an unnecessary hysterectomy, most likely due to having been prescribed benzodiazepines 37 years later. And none of the THREE doctors I consulted were aware of this problem.

Misdiagnoses of symptoms due to Benzo use can also lead to being prescribed psych meds for psychiatric disorders of which you may not have. It can even lead to patients being institutionalized and forcibly drugged, such as in the case of Cheryl Knight, the subject of Gary Null’s documentary ‘Death by Medicine’. Some patients are actually subjected to being ‘treated’ with Electroconvulsive Therapy (electric shock treatment). All for conditions they do not even have.

If you read the prescribing guidelines, benzodiazepine medications were intended for short term use. Most being 4, 6, or 8 weeks. Yet doctors renew prescriptions for them month after month, and year after year.

Aside from what they may be doing to your overall health long-term, as time goes on, benzodiazepines make changes to the way your body chemistry works which can cause an INCREASE in many of the symptoms you originally started taking it for. Once your body adjusts to the medications, the mechanism that naturally calms you down no longer functions properly.

Here is the technical explanation: After exposure to benzodiazepine, the ability of the neural receptors to attract GABA is reduced. Therefore, even after there is no longer any benzodiazepine in the body to influence the receptors directly, they still aren’t able to bind enough GABA to themselves to inhibit electrical excitation sufficiently. This phenomenon is called ‘down-regulation’ of the GABA-a receptor sites. A more thorough explanation can be found at the link below. It is a one-page information sheet for doctors that patients can use to start a dialogue on why they should discontinue their benzodiazepine medications.

Restless Leg Syndrome, Insomnia, Anxiety, Muscle Cramps, and most other symptoms that these drugs are prescribed for can actually be made worse upon long term use. These drugs can work well at first, but as time goes on and they change the way your body functions, you could see an increase in the very symptoms you were originally using the Benzos for. You might also see the appearance of new (seemingly unrelated) symptoms. Or both. If you are taking benzodiazepines for anxiety, and yet you still experience anxiety, or if you have had your dose increased due to a worsening of symptoms, then you can be fairly certain that the benzodiazepine use is now actually what is CAUSING most of your anxiety. Virtually anything benzos are given for can potentially increase in severity once tolerance to the drug develops. Tolerance withdrawal can occur when your body has made the adjustment to the benzo, and you actually experience withdrawal symptoms although you are still taking the drug.

Another problem can be inter-dose withdrawal, where the drug has worn off to an extent, creating a mini-withdrawal with the accompanying symptoms. They seem like your original symptoms, so you think you are just getting ‘worse’.

At first, the drugs work. You think you’ve found the magic pill to take away all your problems. (This is why benzodiazepines were initially referred to as “Mother’s little helper”.) They are truly a marvel….at first.. Then they can take your life away. More information on this is available on the Benzo website.

If one wants to come off Benzos

The first thing one should know about discontinuing these drugs is that if you are on them, and want to come off, they must be tapered very slowly. More slowly even than your doctor has been told is advisable.

This has nothing to do with one’s ‘toughness’ or how strong a person you may be. It has to do with what is best for your health. ‘Cold turkey’ withdrawal from benzodiazepines can lead to very serious and long-term withdrawal symptoms, including seizures. You can find more information on this in Benzodiazepines: How They Work and How to Withdraw (Also known as ‘The Ashton Manual’) by Prof. C. Heather Ashton. Dr. Ashton is a psychopharmacology professor who ran a benzodiazepine withdrawal clinic for 12 years doing extensive research and is the leading authority in the world on benzodiazepines. Please keep in mind when reading the information that when she refers to “long term use”, she is referring to anything over SIX WEEKS. Her credentials are on the benzo.org.uk website.

My recommendation; my experience

Even if you are not having problems with them now, you will know what signs to look for. I would not, however, recommend waiting until they become problematic. The withdrawal can be more difficult if you wait until you are experiencing inter-dose or tolerance symptoms. If you have never taken these drugs, please DO NOT START. They can ruin your life and your health. They can ruin your family relationships and disconnect you from your very self. I have been through this, and if I could go back and not have ever taken that first Xanax, I would give anything I own. I would give everything I own. Everything.

The benzo damage and the protracted withdrawal experience I went through from having been on such a high dose and taken off cold-turkey robbed me of my very soul. I have never been the same. My doctor told me when he first put me on the medication that I would need it the rest of my life. He had diagnosed me with Anxiety. I didn’t even ever HAVE anxiety until after I took that drug. When started on these drugs, I had heart palpitations as my only symptom, and they were later attributed to Mirtal Valve Prolapse.

I quickly became tolerant to the drug, my heart palpitations increased in frequency, and I felt worse in just a few days. This can happen in some cases. My doctor had said my symptoms were worse because I wasn’t taking enough of the medication, and raised my dose. I started at .25 mg. of Xanax and he kept raising it because I kept “getting worse” until I was at 14 full mg a day in less than a year. That is the dosage equivalent of 280 mg. of Valium.

Something else that doctors are usually not informed of is the equivalencies of doses between the different benzos. One milligram of Xanax is the equivalent of TWENTY milligrams of Valium. No doctor would ever prescribe someone 280 mg. of Valium.

Eventually, he informed me that I was addicted and had to get off. So I was taken from 14 mg. of Xanax (equal to 280 mg of Valium), to 3mg. of Ativan, (equal to 30mg. of Valium). I was given three days to make this switch. I went through hell. It felt like I was being tortured every single day for the first three years. I was so ill and so unable to think clearly that I could not figure out how to clean my kitchen. I was afraid to take a shower or to do my laundry. All because my doctor did not know how to recognize tolerance withdrawal symptoms, and did not know the dosage equivalencies. The anxiety and fears caused by the withdrawal of these drugs are much, much worse than any type of anxiety one ever has without them. It is paralyzing.

When discontinued incorrectly, withdrawal can be horrific. It doesn’t even leave you with any ability or strength you may have had inside yourself to draw from to cope with a painful situation. You just cannot access it. It’s gone.

The current recommendations by those who are experienced in this matter, is a reduction of not more than 5 — 10 % of your daily dose every 2 — 4 weeks. This may seem extreme, but benzodiazepines can do such extensive damage that the body needs this very slow taper in order to adjust to the absence of the drug. Please be advised that cold turkey withdrawal, or even tapering too quickly, can lead to a very difficult and painful withdrawal syndrome that can last years. Inform yourself before making decisions about any changes to your medications, and always discuss them with a qualified health professional.

NOTE: Excess anxiety (which is usually due to excess adrenaline) can have treatable causes for thyroid patients, including remaining hypothyroid due to T4-only medications, a cortisol problem, and/or inadequate iron…plus other causes.

Also, we know that not everyone has had a bad experience. This is not claiming that. But it seemed important for people to be aware, just in case. It’s totally up to you.